Strobel Energy Group, one of the leading midstream EPC companies in the US, recently switched from LogMeIn Central to Splashtop Remote Support. The results are in and the switch has had a positive impact on multiple levels.

In this case study, you’ll discover the challenges Strobel Energy Group faced, and how switching to Splashtop helped them overcome those challenges with ease.

About the case study

With an IT infrastructure consisting of several virtual servers, hundreds of computers, and a work force scattered across multiple countries, the demands for Strobel Energy Group’s IT team are high. After using LogMeIn Central and having their price raised again and again, Strobel Energy Group decided to give Splashtop a try.

Splashtop Remote Support proved to perform up to the high standards that Strobel Energy Group demands. Plus, switching to Splashtop cut Strobel Energy Group’s remote support cost by over 80 percent, and gave them access to more than double the amount of devices that they originally were able to support with LogMeIn.

You can read and download the case study below: 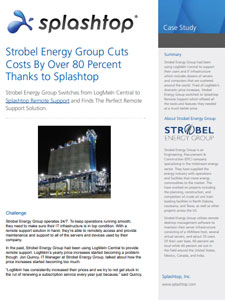 Find out why thousands of others have already switched to Splashtop

Discussing Splashtop’s Pivot, Present and Plans for the Future with Co-Founder Philip Sheu

What You Need to Know About Splashtop Alternatives

Adobe is hooked on Splashtop