Storm Ventures has participated in all Splashtop’s funding rounds, from Series A in 2006 to Series D in 2010, and now in the most recent funding: $50 million that pushes Splashtop’s valuation above $1 billion.

For each of these Splashtop funding events, the primary Storm investor has been Ryan Floyd, the firm’s co-founding managing director. Storm even invested in our previous company, OSA Technologies, which was in a completely different market (embedded intelligent platform management interface [IPMI] firmware for servers).

Given Ryan’s long-time involvement with Splashtop, we wanted to get his perspective on how he sees our journey so far—and where he sees our company and our market headed in the future. 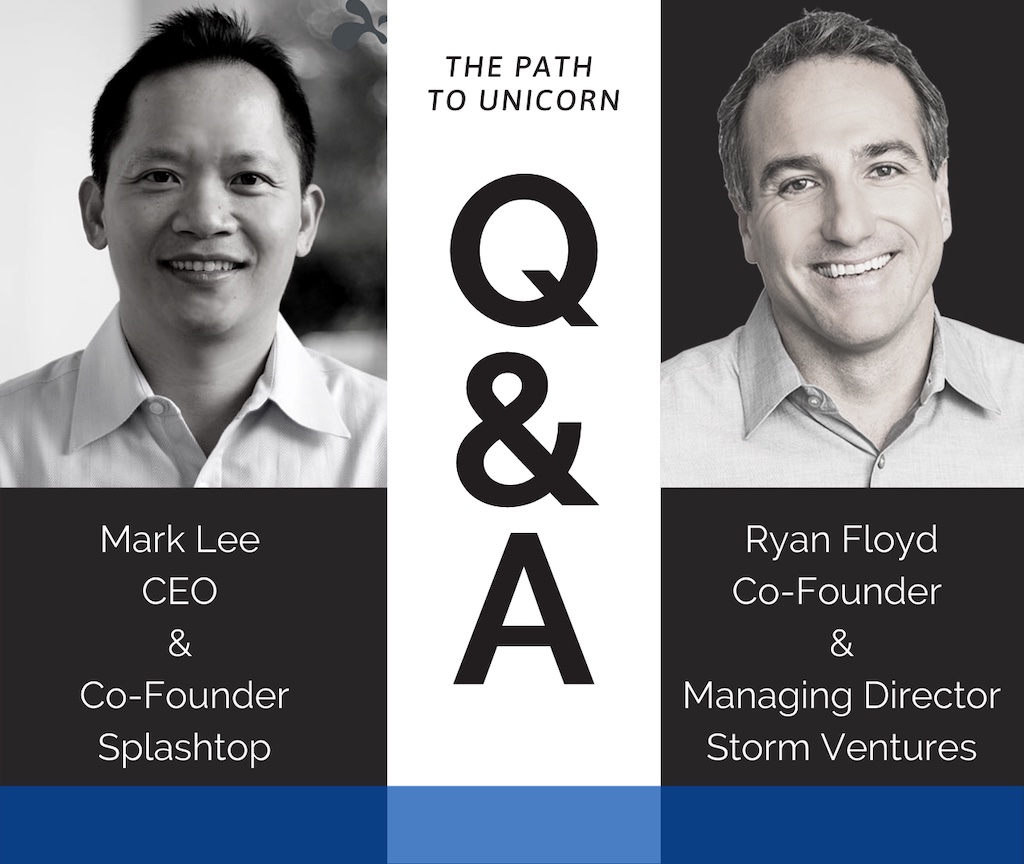 Mark Lee: Ryan, you’ve invested in lots of companies over the years, and you’ve been one of our investors since Splashtop first started. Would you call Splashtop a typical investment for Storm Ventures?

Ryan Floyd: I’m not sure there’s such a thing as a truly typical investment. But I can tell you that Splashtop is different from most of the other investments I’ve been involved in, on a few levels.

For one thing, so many times we invest in companies that are trying to establish a totally new market. But in Splashtop’s case, you’re disrupting the established remote access market, which at the moment is exemplified by virtual private networks (VPNs).

VPNs had their day, but they’re a legacy approach. They’re clunky, difficult to manage, expensive, and they’re burdened by their centralized command-and-control infrastructures. They can’t keep pace with the digital transformation that today’s organizations are undergoing.

By providing a modern, cloud-based, secure approach to remote access, Splashtop is presenting a clear alternative to a technology and market that is very familiar, but that few have much affection for.

Another way Splashtop is different is that you’ve been profitable for many years.

Ryan: And not just slightly profitable, but significantly profitable. You’ve been building a strong balance sheet, which is not something most venture investors know anything about. And importantly, you haven’t sacrificed fast growth along the way. I can tell you that combining high growth with high profitability definitely makes Splashtop an outlier, in the best possible way.

Mark: Our recent growth and profitability were certainly accelerated by the COVID-19 pandemic.

Ryan: For sure, Splashtop experienced a real COVID-19 tailwind. But I think the pandemic just illuminated and accelerated something that was already happening.

One of the most powerful trends in enterprise IT over time is making it easy for users to access and get the data they need to do their work. People want to be independent. They don’t want to have to ask for permission or get special equipment or go through all kinds of hoops. They just want to get what they need to do their jobs, without barriers or hindrances. If you provide people with the tools to get their jobs done more efficiently and effectively, they are going to adopt those things en masse.

For many enterprises and other large organizations, and even many small businesses, it took the enforced work-from-home requirements of the pandemic for them to discover that people could do digital work remotely, often as productively as if they were physically in the office.

Mark: We like to say that the work-from-home genie is out of the bottle, and there’s no way it will go back in!

Ryan: Exactly, yes! That’s another powerful aspect of the Splashtop story, is that you approached the technical issues of remote access with a fundamentally consumer-type mindset, meaning you made it really, really easy to use, as well as affordable. So individuals love using Splashtop.

But at the same time, you’re solving a core enterprise issue, which is all about a better way to connect employees with the data, software, and other digital resources they need to do their jobs most effectively.

For enterprises, it probably took something like the pandemic to get them to try this better way to do things. But like so many other things with COVID-19, now that we’ve seen the light—experiencing that better way to do remote access—anyone who thinks we could go back to our pre-pandemic approaches would be kidding themselves.

Ryan: And that reminds me of another way that Splashtop really distinguishes itself. I know you and the three other founders are way too humble to say this, but you guys are incredibly technical. It’s not like you cobbled together some random technologies and stuck a user interface on it, which unfortunately is the case for a lot of software companies.

The Splashtop team has really built, from the ground up, a system that operates securely across some very difficult technical challenges.

As an investor, one of the things I get excited about is that you’ve essentially built a big moat that would be very difficult for others to cross. Meaning, it would be really hard for someone to replicate what Splashtop has built. This is not true for many venture-backed companies.

In that way, Splashtop is kind of like Zoom. Lots of other videoconferencing tools have video and voice. But part of the magic of Zoom is that they spend so much time writing low-level code, which sits in their application and runs on our computers, that makes their video performance that much better than their competitors’.

It’s not that it would be impossible for someone to do what Splashtop has done. But there’s a lot of technical magic behind your remote access approach. That depth of technology might not be obvious to many of the people who just use and like the software, but that depth is what makes it so robust and enables it to work so well.

Mark: Well, we’ve definitely worked really hard on our technology, and we continue to invest in making it better, all the time. We’re fortunate in that all four of us founders share the same vision and level of commitment to what we’re trying to achieve.

Ryan: I actually think the closeness of the four founders is one of Splashtop’s superpowers! It’s rare to find four founders that have been together so long—in your case, since your college days at MIT, where you were all electrical engineering and computer science students—and who really operate more like a family.

Mark: All four of us grew up in California as the kids of Taiwanese immigrant parents. So even though we didn’t meet until MIT, we started with a shared culture and upbringing. We treat all Splashtop employees as part of our family, and that approach is a big reason why the team has been successful.

Ryan: That close sync, along with the team’s technology skills, is probably responsible for another thing that impresses me about Splashtop: your grit and resilience. Over the years, you’ve faced some pretty drastic market challenges and have had to completely pivot the business.

That combination of the vision to see a different path, along with the skills and hustle to commit wholeheartedly to that new path, is pretty special. It helps explain Splashtop’s success so far, and it gives me confidence, as an investor, of your continued success.

Mark: We all really appreciate the support you and Tae Hea (who is the co-founder of Storm) have given our team over the years. Here’s to even better achievements in the future!

Splashtop Posts Significant Milestones on its Way to $1B Valuation

Operate a Remote Weather and Broadcasting Station From Anywhere

Can Splashtop Be Used to Spy on Remote Workers? Q&A

How to Evaluate the Security of your Remote Access Software

Remote Support Solutions for IT and Helpdesk – Splashtop Enterprise vs. Splashtop SOS Unlimited

Splashtop and Sapphire Ventures – A story of friendship and partnership