PETstock IT Team Switched from TeamViewer to Splashtop

Shaun Dunstan, IT Manager of PETstock, explains how PETstock switched to Splashtop to support its IT operational needs. PETstock was previously with TeamViewer but decided to switch to Splashtop SOS to reduce operational cost and offer the IT team a more user-friendly remote support tool enabled with SSO.

As the IT Manager of the support team for PETstock, Shaun and his team were tasked with maintaining and supporting IT operations. To automate processes and increase efficiency, the support team used TeamViewer to perform most tasks.

However, TeamViewer came at a high cost and was heavy on computer resources. “I wanted a product that was a bit lighter to install and easier for management,” said John.

He further explained that anyone who has used TeamViewer will know it has a comparatively heavy client to install. “The policies and configuration options of TeamViewer were a bit hit-and-miss to apply and we had numerous issues upgrading clients as needed,” said John.

PETstock’s IT team explored several tools until they tried Splashtop. John and his team found that Splashtop not only came with all the right features but was also quite easy to deploy trough the teams RMM.

THE SOLUTION: SPLASHTOP SOS – AN AFFORDABLE AND EASY-TO-DEPLOY REMOTE SUPPORT SOLUTION WITH THE RIGHT FEATURES

“Splashtop is a really good alternative to TeamViewer,” said Shaun. “It is easy to have granular permissions and allow a technician to access a single device only.” Splashtop also comes with robust security features like TLS and 256-bit AES encryptions, device authentication, two-step verification, and multiple 2nd-level password options. And most recently, Splashtop added an extra layer of protection to its remote access solution: SSO integration which enables users to authenticate their Splashtop account using their centralized SSO user ID and password. This was particularly important to Shaun’s team as they used Azure Active directory.

THE RESULT: AN EFFORTLESS MIGRATION TO A LIGHTER, SECURE AND RELIABLE REMOTE ACCESS SOLUTION

PETstock’s support team was able to migrate from TeamViewer to Splashtop easily. Shaun’s team used an RMM tool to deploy the Splashtop Streamer and, at the same time, disable TeamViewer.

The PETstock IT team followed the Splashtop support team’s easy instructions to enable SSO with Azure for 25 technicians supporting about 1,200 clients.

Everything is running smoothly and Shaun and his team are really happy with the reliability and support they are receiving from the support team. And as an added bonus, PETstock saved 20% after switching from TeamViewer to Splashtop.

Founded in 2002, PETstock is a 100% Australian, family-owned and operated business, offering the best quality products and services to pets.

Splashtop SOS is a complete remote support solution that offers unattended quick support as well as attended anytime computer access with a simple session code. Designed for IT departments, help desk, and support professionals, SOS allows users to perform ad-hoc remote support to unlimited devices. No matter where the user is or when their problem arises, SOS users can easily remote into their users’ Windows, Mac, iOS, or Android device, to fix issues quickly. SOS reduces the time it takes to support users, keeps customer satisfaction high, and reduces costs for remote support teams. Learn more about Splashtop SOS.

About Splashtop’s Integration with SSO

With the Single Sign-On (SSO) integration, Splashtop users can authenticate their Splashtop account using their centralized SSO user ID and password. Splashtop SSO makes use of SAML 2.0 standards and integrates with all major identity providers. Learn more about Splashtop SSO.

“We found that Splashtop is a really good alternative to TeamViewer, lighter on resources and nice by default that it doesn’t have a client local ID and Pass which anyone can use to connect.”

– Shaun Dunstan, IT Manager of PETstock. 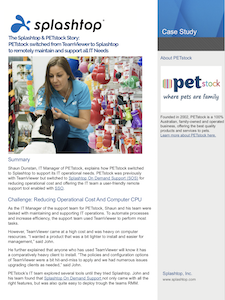