Splashtop is a Great Alternative to Your RDP / VPN Infrastructure

Legacy VPN a Nightmare? Fed-up with RDP? Is It Slow and Costly?
Try Splashtop instead and support the BYOD World

Are you considering Microsoft RDP (Remote Desktop Protocol) over a VPN to enable employee remote access to Windows and Mac computers? Using RDP alone outside the firewall exposes traffic to security risks – and can make host computers vulnerable to outside attack – so VPN is required. This may seem like an easy or inexpensive choice, but organizations who implement it soon come to realize that this solution is expensive to set up, maintain, hard to scale, cumbersome for employees to use and have lag issues.

Common problems of using legacy remote access means through RDP over a VPN include:

Why is Splashtop a Better Choice than Legacy RDP / VPN? 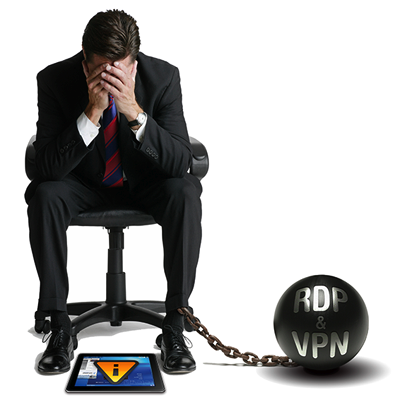 On November 5, 2019, The FortiGuard Labs team recommends that customers immediately apply the latest patches from Microsoft for CVE-2019-0708 on any affected machines, and where possible, also disable RDP completely. BLUEKEEP RDP ATTACKS ARE STARTING: https://www.fortinet.com/blog/threat-research/bluekeep-rdp-attacks-starting-patch-now.html.

No more Legacy RDP over VPN hassles! Access your desktops, apps, and files with Splashtop.

Splashtop is designed to give users seamless, secure remote access to their computers from any device, embracing BYOD. With its industry leading remote desktop technology running through a secure SSL (AES-256) tunnel, Splashtop allows users to access their PC and Mac desktops via their Windows, Mac, iOS, Android, or Chromebook devices as if they are sitting in front of their computers or servers. You get all the benefits of RDP/VPN without the issues and complexities mentioned above. Also, it takes only minutes to set up.

Give Splashtop a test drive. No credit card or commitment required to get started.