May 19, 2011 – San Jose, CA – Splashtop® Inc., the worldwide leader in instant-access computing, has racked up impressive new records as their paid Remote Desktop iPad app has beaten out the new Guinness World Records® Holder, Angry Birds, in Australia and New Zealand to become the number one overall iPad app this week.

Since launching in September 2010, Splashtop Remote Desktop has climbed the charts to become the number one paid iPad app overall in 15 countries and the number one iPad business app in 40 countries, according to App Annie. Note that rankings are monitored frequently and often change hourly. 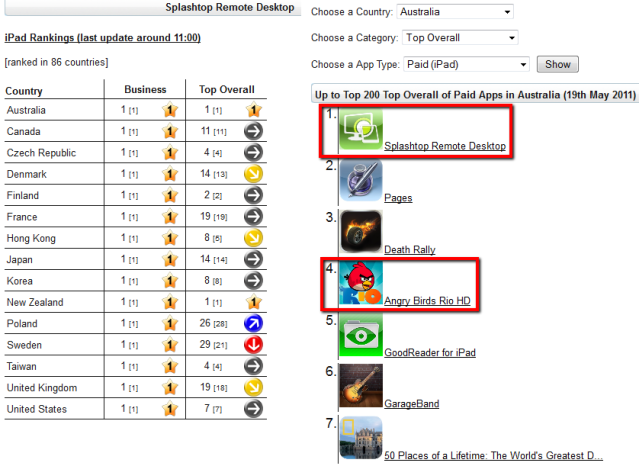 “If you don’t think beating Angry Birds is a big deal, go ask your kids!” said Mark Lee, CEO and co-founder of Splashtop. “OK, seriously, we’re not really trying to compete with Angry Birds. In fact, Splashtop is a wonderful enabler of games.” Even though Splashtop’s Remote Desktop is categorized as a business app, the company is quick to point out that quite a few hard-core gamers are using it to play graphic-intensive PC games such as World of Warcrafton their iPads. Who knew it is actually a revolutionary gaming app in disguise?

As blogger Brian Johnson from TouchArcade points out in his recent review, “Splashtop is basically a 1:1 representation of what is happening on your PC, and is totally enjoyable to game on!” Finally, a gaming app that can satisfy both camps – the average casual gamers, who increasingly turn to their mobile devices for a quick game such as CityVille to pass the time, and the serious gamers who want a richer and deeper game play experience.

About Splashtop
Splashtop Inc. (formerly known as DeviceVM, Inc.) was founded in 2006 with the goal of optimizing the computing experience so that people everywhere can quickly access content and applications. The Splashtop OS product, first introduced in 2007, is an award-winning instant-on platform that allows users to get online, access e-mail, and chat with friends seconds after turning on their PC. Splashtop Remote Desktop, a best seller in the Apple App Store, allows users to enjoy their full computer experience from a smartphone or a tablet, while away from their PC. The application is available now in the Apple App Store, on iTunes, in the Android Marketplace, and the webOS App Store.

Today, Splashtop-based products are available on more than 60 million PCs from leading manufacturers including Acer, ASUS, Dell, HP, Lenovo, LG and Sony. Splashtop has received numerous awards, including the prestigious “Most Innovative Product” award from PC World, the “Best of What’s New” award from Popular Science, and “Best of 2011 CES” award from LAPTOP Magazine. Splashtop Inc. is headquartered in San Jose with offices in Beijing, Hangzhou, Shanghai, and Taipei. For more information, visit https://www.splashtop.com.