Easily migrates from LogMeIn to Splashtop in one evening

EPAD Business IT, LLC, an IT services provider, recently switched to Splashtop Remote Support after using LogMeIn Central for several years. The move came after LogMeIn informed EPAD Business IT that their annual subscription cost for 2019 would be more than double what is was the previous year.

By switching to Splashtop, EPAD Business IT saved more than 70 percent (more than $2,000 in savings) on their cost. And thanks to a simplified migration process from LogMeIn to Splashtop, they were able to successfully migrate their 250 managed computers from LogMeIn Central to Splashtop Remote Support in just one evening, saving them countless hours and headaches in completing the transition process.

EPAD Business IT’s clients rely on their computer infrastructure for their daily business operations. When something goes wrong, they expect EPAD Business IT to be available to resolve the issue as fast as possible. This makes having a reliable remote support solution essential.

EPAD Business IT was informed by LogMeIn that their price was going to increase to $1,599 for their renewal in 2019, an increase of over $300 for the same subscription package. However, that was before LogMeIn discontinued their packages (Basic, Plus, and Premier) and replaced them with a LogMeIn Central “Base Plan” with additional features needed to be purchased in add-ons.

With the new pricing structure, EPAD Business IT’s 2019 renewal cost increased to a whopping $2,999. That’s more than double what they paid in 2018.

Eric Gravens, Owner of EPAD Business IT, was ready to switch at that point.

“Our price was going from $1,247 to $2,999 for LogMeIn Central [for 250 computers],” said Gravens, “LogMeIn did switch to a different pricing/suite tier, but even their basic suite was ludicrous!”

Gravens needed a reliable and secure remote support solution to provide support to his clients, and he wanted to find one at a lower cost than LogMeIn.

Gravens spent several months looking for the best solution to replace LogMeIn at his company. In addition to price, Gravens also had a few other major requirements while evaluating alternatives:

“We shopped around a lot in 2018 and early 2019,” Gravens recalled, “We checked TeamViewer, RemoteToPC, and RemotePC… we trialed a lot of packages and eventually chose Splashtop.”

Splashtop Remote Support meets all of Gravens’ major requirements. In particular, it was Splashtop’s Android client that caught Gravens’ attention. “We opted for a cleaner, nicer Android client,” said Gravens.

Plus, Splashtop Remote Support is much lower priced than LogMeIn. In fact, after making the switch EPAD Business IT payed less for Splashtop than they did for LogMeIn even before this year’s price hike. By switching to Splashtop, EPAD Business IT saved over 70 percent on their cost.

Once settling on Splashtop, Gravens got started on the migration process. Originally, he thought this process would take days. Instead, it only took a few hours.

“As for moving all our clients off LogMeIn to Splashtop, I was expecting a huge headache,” Gravens said, “However, it was awesome! By awesome, I mean AWESOME! It took one evening to migrate almost all our PCs from LogMeIn Central 250 Basic to [Splashtop Remote Support].”

“It saved us an unknown amount of man hours and I was able to do the migration myself in one night! No group policy scripting required,” Gravens said. “Before our subscription of LogMeIn ended, we started a trial of LogMeIn Premier… We created each group in Splashtop and created the deployment streamer for each group. The entire process of Splashtop’s deployment took under 3 hours for all our PCs. We had a few clients that forgot to leave their PCs on, so we had to take care of those the next day. Not a problem, the vast majority were done that evening.”

In the end, Gravens secured an alternative remote support tool that is reliable, secure, meets all of his major requirements, and costs significantly less than LogMeIn. EPAD Business IT is now saving over $2,000 on their annual cost with Splashtop!

Gravens was also able to successfully migrate his clients’ computers in one night, saving countless hours of work.

What else did Gravens like about Splashtop? He listed out several of his favorite features for us:

EPAD Business IT is one of the thousands of business that have switched to Splashtop in recently years due to its high quality, suite of top features, and lower price when compared to similar products. You can try Splashtop Remote Support for free to find out for yourself why so many MSPs and IT pros prefer Splashtop.

About EPAD Business IT

EPAD Business IT is a computer business based in Arizona that services small and medium sized companies, and limited residential clients.

EPAD Business IT sets up and services networks, which includes repairing, upgrading, or installing new fileservers and work stations based on the Microsoft operating system.

They also perform any IT task requested by their clients, including cabling, network hardware, computer equipment and software. They work as a “one-stop” computer needs service for their clients.

EPAD Business IT uses remote access software to maintain and support their clients’ computers remotely. This helps the company keep their commitments to their customers to provide service to their computers.

For MSPs who want unattended remote access to their managed computers. Provide remote support to Windows and Mac computers from any Windows, Mac, iOS, and Android device. Additional monitoring and management features available.

Why Choose Splashtop over LogMeIn?

Here’s why tens of thousands of businesses like EPAD Business IT prefer Splashtop:

Easily migrate all of your endpoints from LogMeIn to Splashtop in just two steps. Learn how here.

“As for moving all our clients off LogMeIn to Splashtop, I was expecting a huge headache. However, it was awesome! By awesome, I mean AWESOME!”
Eric Gravens
Owner
EPAD Business IT

Learn more about Splashtop Remote Support or try it for free. 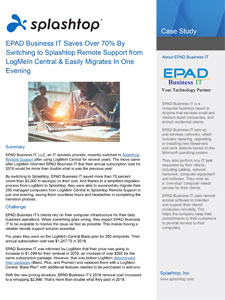