How can remote access improve productivity and flexibility in the media and entertainment industry? Four of our M&E customers share their stories. 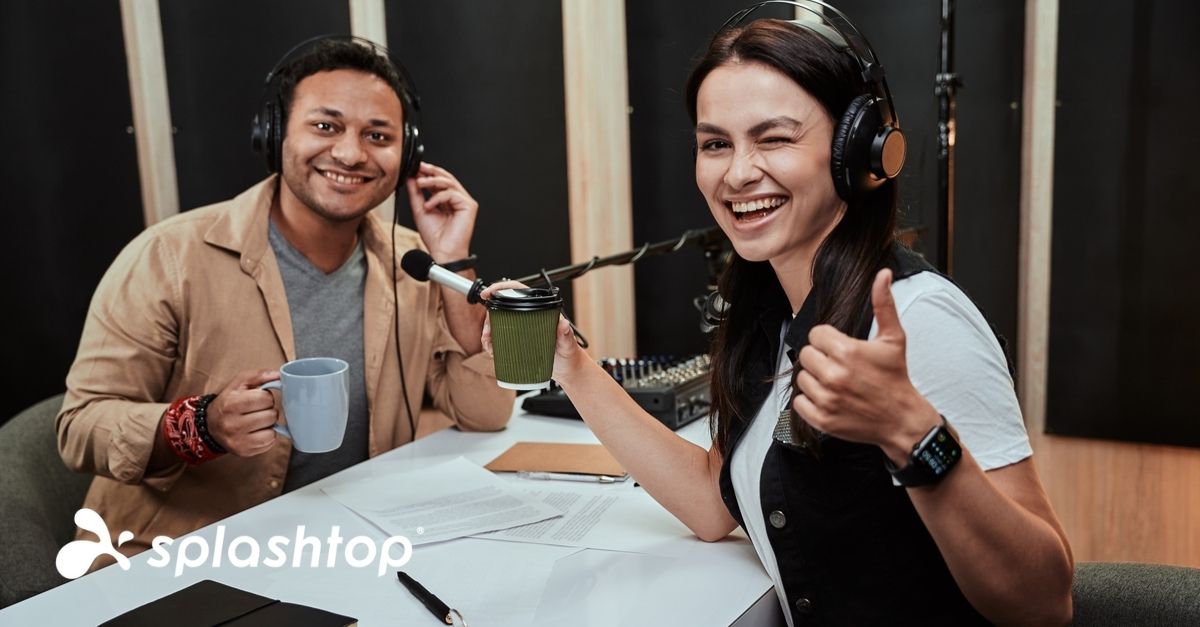 The pandemic has changed so many of our habits, including the type of media we consume. Pre-pandemic, social media had a hold on our collective media consumption habits. However, lockdowns and social distancing have seen a rise in film and TV viewership. A 2020 Nielsen study suggests that—due to its array of options—connected TV usage spiked during the pandemic and has remained high (even after global lockdowns ended). These all-time high consumption levels are keeping the media and entertainment industry on their toes as they find ways to create content with a remote workforce.

How much more productive, efficient and flexible could the media and entertainment industry be if creatives, partners and customers had access to a secure, fast and easy-to-use remote access solution? Well, now you don’t have to wonder. Warner Bros., Adobe Video, TechCastles and Boxel Studio have stepped up to explain why they are ‘Wowed!’ by the performance and simplicity of Splashtop remote access solutions.

Core to the simplicity advantage delivered by Splashtop, these customers (or their partners) leverage a single Splashtop app to handle all their remote access needs. Since Splashtop is easy to install and integrates seamlessly into existing IT, companies are providing creatives with immediate high-speed remote access. As for performance, Splashtop enables production at speeds of up to 60 frames per second and zero-lag connectivity which ensures they outperform industry peers.

It all adds up to massive productivity and flexibility for creative workers such as game developers, video editors, 3D designers and animators.

Today, WBITV New Zealand editors remotely use their office-based Windows and Mac workstations that run specialized software, including Avid Media Composer and DaVinci Resolve. The solution gives them the same security and productivity they experience when in the office.

WBITVP were able to set up and run Splashtop within just 5 hours, including the deployment and user rollout. Splashtop Enterprise enables the company’s IT admins to maintain greater access control through user, computer, role and group-based granular permissions.

“From the initial introduction through to giving users access, I was very impressed with the simple yet secure setup. We can manage users and groups and assign them on the fly” – Mike Marsh, IT Manager at WBITVP New Zealand.

Noting the need for media and entertainment companies to keep all content highly secure, Marsh highlighted the elegant simplicity of Splashtop’s security features.

“We use Okta for single sign-on (SSO), and one of the main reasons we chose Splashtop Enterprise was because of the easy and seamless SSO integration, in addition to the other security checks like 2FA, device authentication, encryption, etc.”

“We were trying AnyDesk on a few computers, but after using Splashtop, users’ feedback was that the frame rate was far better and they had a more responsive experience.” — Mike Marsh, IT (Information Technology) Manager at WBITVP New Zealand.

Adobe’s media and entertainment customers often work with petabytes of footage that requires strong A/V sync and the ability to work rapidly. They find that Splashtop excels in this area. Especially when remoting from a Mac to another Mac, even from six thousand miles away.

“With Splashtop, Adobe users can securely use their personal computers, Android, iOS and Chromebook devices to work productively, no matter where they are located.” – Sue Skidmore, head of partner relations for Video at Adobe

Karl Soule of Adobe Video explained the value of Splashtop this way:

“When video editors are hitting 3 or 4 keys per second with the fast trims that promo departments do, it’s crucial to have something that is responsive that keeps A/V sync in line; that’s one of the areas where I have found that Splashtop excels.”

TechCastles Media Services® serves as a critical enabler of the film industry in Georgia. The company implements and monitors IT infrastructure for film-related school environments, film studios, and post-production facilities.

TechCastles implemented Splashtop for a Georgia-based film school. They needed fast, high-quality remote access for both their students and their California-based editing partners who require remote access to the school’s post-production systems. The speed and quality had to remain consistent, while working with Avid software and tools for post-production – the Avid Pro Tools digital audio workstation and the Avid Media Composer software.

Prior to Splashtop, remote post-production was not possible for the students and editors. The previous remote access solution could not integrate seamlessly with Avid software and tools, and failed to sync the audio correctly with any of the Avid products.

Within a matter of hours, TechCastles was able to deploy Splashtop to 150 classroom computers and 25 workstations focused on Avid Pro Tools. Both students and editors gained access to the systems and tools they needed immediately.

“I just click, drag and drop email addresses to enter people into the system. Before Splashtop, I had to manually enter each user’s name, email address, specific access and app permissions and restrictions, and then save all that information.” – Margaret Chu, Partner at TechCastles.

The students and California-based editors alike are performing remote film production at optimal levels of quality and performance. This is thanks to high-speed connections and HD-quality streaming and sound.

“Splashtop isn’t just fast, everything is seen and heard at the highest quality – and it’s all synchronized,” – Margaret Chu, Partner at TechCastles.

Boxel Studio chose Splashtop to enable their artists to remotely access high-end workstations and software, just as they would in the studio. The studio was extremely cautious as they sought a remote access solution, noting the high value of the content being handled.

Boxel Studio obtained both high security and secure remote support with their purchase of Splashtop Enterprise. Since their IT team leverages the same secure platform to provide remote access and support workstations effectively, Boxel has reduced manual work in these areas by 80%.

“From acquisition of the license to the user experience, it’s just a blissful, no-hassle experience. It was so fast and easy to deploy Splashtop – you need to add more users? Click-click, super simple!” – Andres Reyes, Chief Technology Officer at Boxel Studio

The Boxel CTO and his team tested many remote access solutions. They found that nearly all focused more on IT departments to provide remote support, rather than to deliver an enjoyable user experience. In some cases, the latency and video compression did not work for them. They also tried hardware-based solutions, but those were highly susceptible to distance-induced latency. Splashtop performance not only proved far higher, it did not fluctuate.

“With the other solutions we tried, users were saying it’s too cluttered, it’s too slow, this is not what I wanted, and so on. We deployed Splashtop and immediately we’re getting emails from our artists – Wow, this is great, now I can really work, I can really get my job done.” — Andres Reyes, Chief Technology Officer at Boxel Studio

Want to learn more about how Splashtop Enterprise can support your media and entertainment company?